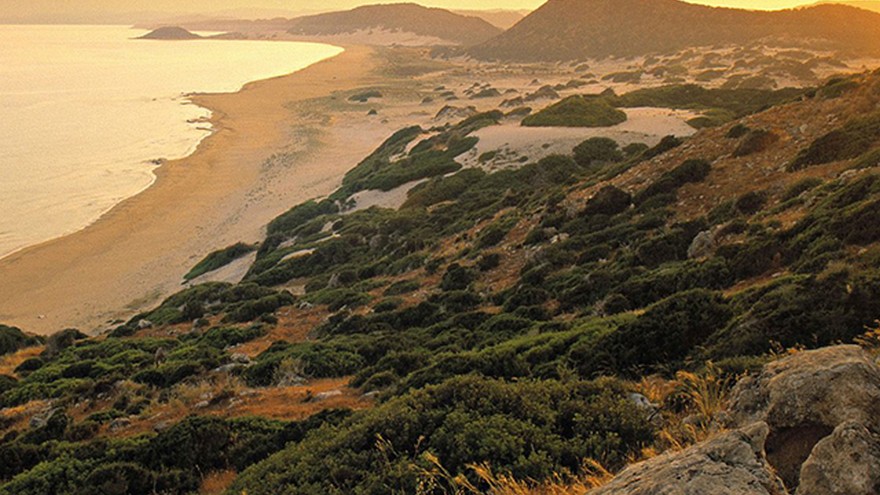 Cyprus is an island in the Mediterranean see, located north of Israel and south of Turkey. Its size is around 9,250 square kilometres. It has a population of around 1,100,000 people. The country’s (rounded) Gross Domestic Product (GDP) is 17 billion EURO. This is 0.2% of the EURO zone’s total GDP.

2. What are Cyprus’ main economic sectors?

3. How (intrinsically) strong is the Cyprus economy?

Since the country’s independence in 1960, Cyprus has for fifty years (until the recent crisis started) experienced none of the crises many other countries has suffered from, such as inflation, currency, banking, external or internal debt crises.

It has also been unique in experiencing a prolonged period of stability accompanied by growth. Since the division in two parts of the country in 1974 until the start of the current crisis, the average GDP growth has been 4% and unemployment 3.5%.

The Cyprus workforce is highly educated. The country has the third highest percentage of university graduates of all countries in the world.

4. What is the current status of Cyprus’ economy?

Like most of the countries in the EU, the Cypriot economy is currently in a recession.

5. What are Cyprus’ main banks?

6. Why did Cyprus need a loan?

Both BOC and ML had accumulated significant amounts of Greek Government bonds. Based upon an agreement between the Greek Government and its bond holders in October 2011, both banks had to write-off these bonds for almost 70%. This caused the capital of each bank to drop below the level agreed in the so-called ‘Third Basel Accord’ aka ‘Basel III’. Basel III is a global standard on bank capital adequacy, stress testing and market liquidity risk, agreed upon by the members of the Basel Committee on Banking Supervision in 2010-2011.

Since it appeared impossible to find investors for provision of the funding because of the bad economic climate, the Cypriot State was the last resort to provide this funding. HB did not have to be funded. For this reason the Cypriot State became owners of 86% of the shares in ML and it was supposed to provide necessary additional capital for BOC as well.

Furthermore, a large amount of bonds issued by the State of Cyprus is about to expire in June this year. These bonds need to be refinanced.

7. When did Cyprus apply for the loan?

In June 2012, Cyprus has officially applied for a loan from the EU’s so-called EFSF/ESM fund (the European Financial Stability Facility and the European Financial Stabilization Mechanism). The initial amount required was around 17 billion EURO, equal to its GDP. Initially, on 16 March 2013 it was decided during a meeting of the finance ministers of all EURO zone countries that a loan of 10 billion EURO would be granted to Cyprus. The remaining amount had to be funded by Cyprus itself.

Partially this would be done through privatizations.

8. What happened with this plan?

The plan was rejected by the parliament of Cyprus on 18 March 2013.

9. Why wasn’t it ‘just’ decided to grant a loan for the full amount, as had been the case with other EU-countries applying for such loans (Greece, Ireland, Spain, Portugal)?

The argument that has been put forward is that, by doing this, Cyprus’ Debt/GDP ratio could rise to 145%, a level which is deemed unsustainable by economic experts (120% is usually considered as the maximum level for sustainability).

However, there is reason to believe that the unwillingness of certain countries, notably Germany, to bail out banks where a lot of money from Russian nationals has been deposited, also played an important role.

10. What about Russian money in Cyprus?

There is currently an amount of approximately 75 billion EUROs in deposits with Cypriot banks, 25 billion EUROs of which are said to be from Russian nationals. We must admit that in the press different amounts and percentages are circulating (also about the total level of deposits), but it is safe to say that a significant amount (at least 20%) of all deposits with Cypriot banks belongs to Russians.

11. Why all this Russian money in Cyprus?

This has an historical, geographical, cultural and financial reason.

After the collapse of the Soviet Union in 1992 and conversion of the Russian economy into a free market economy, many private Russian investors were looking for a safe haven and platform from which to structure their Russian and other investments.

Cyprus is relatively close to Russia, it shares the Orthodox heritage, it has an attractive domestic tax system, a lovely climate and it has a favourable double tax treaty with Russia (and other CIS countries). Besides, like countries such as Luxembourg and Switzerland, it had a solid banking secret. This is why a lot of Russian money flowed into Cypriot banks.

12. Is this really all black money?

We are no Russian tax experts, nor have we ever seen tax returns over previous years filed by Russian deposit holders with Cypriot banks, to compare them with income actually generated by those deposit holders in the years in question. And even if we were able to view these returns, we would not be able to determine whether the income was properly reported in these returns, because of our afore-mentioned lack of expertise in Russian tax (and lack of Russian language skills).

However, assuming that a part of it is indeed black, what we also know is that Cyprus is not the only country with high amounts of Russian (black) money. Other examples of countries with vast sums of Russian money are Switzerland, Luxembourg, The Netherlands and the UK.

And besides, both when Cyprus entered the EU and when Cyprus entered the EURO zone, all other countries were aware of the high amounts of Russian money in Cyprus’ banks, but they never made a problem of it, at least not in such a manner that Cyprus was disallowed entrance. So, in our view it would have been better to bring this issue up at those stages, rather than at the time of Cyprus’ application for a bail out.

13. How solid are the anti-money laundering rules in Cyprus?

In a recent report issued by the IMF, named ‘Anti-Money Laundering and Combating the Effectiveness of Terrorism-Report on the Review on the Effectiveness of the Program’, the compliance of jurisdictions with Groupings of so-called ‘AML/CFT (anti-money laundering and combating the financing of terrorism) Recommendations for Advanced Economies’ was assessed by this institution. One of these jurisdictions was Cyprus.

Cyprus received a very good assessment from the IMF, better actually than peers such as The Netherlands, Luxembourg, Malta and, last but not least, Germany.

14. Which solution for Cyprus’ problems was eventually agreed?

On 24 March last, the following solution was agreed between Cyprus and the EURO group finance ministers;

Furthermore, the Cyprus Minister of Finance has amongst others introduced the following temporary restrictive measures with respect to banking and cash transactions.

15. What tax measures have been taken?

From tax point of view the most important measure is the rise of the general corporate income tax rate from 10% to 12.5%.

Other competitive features of Cyprus’ tax system such as the broad tax exemption for dividends and gains and absence of withholding taxes over outbound dividends, interest and, in general, royalties remain in place.

16. What does the future of the Cyprus economy look like?

Nobody can predict the future, but in spite of all the current turmoil, there are important economic indicators that should give confidence, at least on the long run.
First of all, fact of the matter is that after the bail in of creditors, the country’s debt is, at 120% of its GDP, sustainable. Cyprus was, prior to the bail in decision, already running a primary budget balance.

However, what is perhaps more important are the country’s recently discovered gas reserves, which have huge financial and economic potential. According to a recent report published by the Royal Bank of Scotland, Cyprus is poised, in time, to become the strongest government credit in the European Monetary Union owing to its huge natural gas reserves worth a minimum of 200%/GDP. If further excavations match the success of the first findings, these could top 530 billion EURO (2950%/GDP). Assuming a 20% profit margin on these, the value to Cyprus exceeds 580%/GDP.

So, it can be argued that on the long run prospects look hopeful, but on the short run uncertainty will prevail.

We at Equation think that Cyprus is in fact going through a process in various (difficult) stages.

The first stage, averting exit from the EURO zone and achieving a bail out with a sustainable Debt/GDP ratio, seems to have been reached now. The next step that needs to be made is to have the banking system functioning properly again. This will be a serious challenge for the Government. So far, the signs are good as the banks reopened 28th March last and things remained calm without any panic (i.e. bank run). Once that is permanent, Cyprus can slowly start to think about trying to regain territory, which it has lost in the battle for investors’ confidence.

Furthermore, we strongly regret that many deposit holders have lost money because of the bail in and we sympathise with them. In the same manner, even though they are competitors, we would be unprofessional and it would attest to bad sportsmanship if we would be happy about these competitors being into difficulties nowadays because they had advised and opened bank accounts with ML and BOC for clients who now have lost money. Especially under the current circumstances, all corporate providers in Cyprus should demonstrate unity to protect their industry from further damage and to repair any existing damage.

Nevertheless, the only silver lining for Equation in this situation is that none of our clients has lost money because of the EU bail in of Cypriot deposits. We do not pretend that we had foreseen all the turbulent events that have occurred in Cyprus recently, but from the moment that we started our operations (in September 2012) we have only opened bank accounts for our clients with banks other than the two afore-mentioned banks, ML and BOC, that will now undergo restructuring. Unlike many other service providers, we are in the lucky position to have all time to dedicate ourselves to our core services, being tax advice, domiciliation services, accounting services and bank account opening and operation (whether in Cyprus or other countries where we have introducers status) and we do not have any crisis management to do.

If you have any further questions about the above and/or about how this could affect your business activities, please feel free to contact Rutger Kriek at rutger . kriek @ equationcs . com or Annie Yeap at annie . yeap @ equationcs . com.