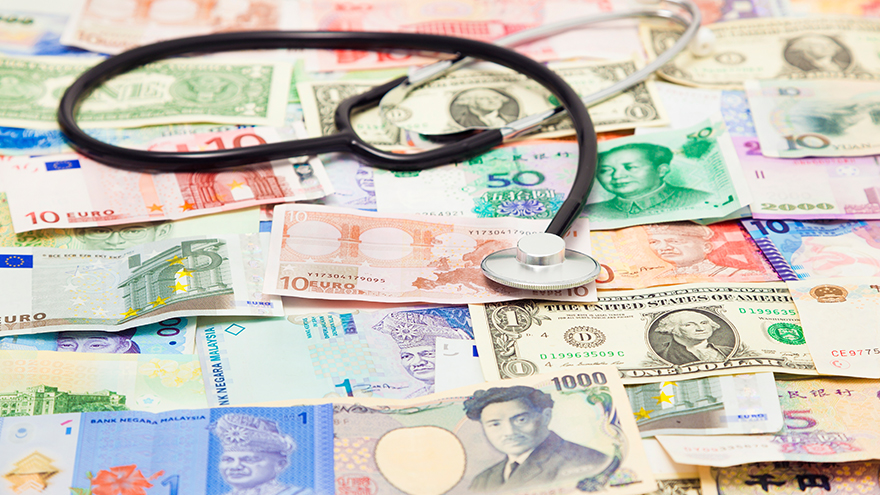 Record public debt not your problem? – Only if you protect your assets from the government

The first months of 2015 started turbulently, currency markets were more volatile than usual, and central bank intervention (including interest rate reductions) are increasing. The geo-political front seems to have calmed down a bit. The focus has shifted to political power games within the European Union, specifically Greece against the Troika (European Commission, European Central Bank and IMF) and austerity preaching governments (like Germany). Many European countries are struggling under austerity policies, especially the southern periphery of Europe: Spain, Italy and Portugal. These countries will watch the Greeks’ play against the Eurocrats and Germany closely. We do not foresee any of these countries leaving the Eurozone soon, but all these troubles should lead to a weaker Euro in the short term.

Another big topic is the possible addition of more sanctions on Russia. US Secretary of State John Kerry stated that the US are willing to increase the scope of sanctions. New sanctions would most probably be supported by the UK and some countries in continental Europe, like Poland and Lithuania. It is unlikely that the all EU countries would find a consensus on further tightening sanctions on Russia over Ukraine.

Coming back to equity markets, the major discussion has been about a possible interest rate increase by the US Federal Reserve and if it happens, when exactly it might occur and to which extent. We believe an interest rate increase is highly likely in the second half of 2015. However, any rate increase would be very small, probably not more than 25 basis points (0.25%). Our reason for only a small rate increase is the slowing growth in the US economy, problems in the housing market, an already strengthening US dollar and the high evel of debt. The White House recently estimated government spending. Estimates show, from 2022 interest payments will surpass all other expenses. Rising interest rates would mean higher financing costs for the US government as well. This is why the Federal Reserve will be very careful with increasing rates.

China becomes once more a major topic as it shows signs the massive housing and shadow banking market bubble could soon burst. A recent McKinsey study (link can be found at the end of the article) shows that overall Chinese debt has quadrupled since the 2007 debt crisis. Much of this debt went into the housing market
where approximately 75% of Chinese household wealth is tied up. Goldman Sachs writes that housing prices fell by -5.0% in January on a per capita year-on-year basis. Investments in China, especially in the housing and banking sector, should be considered with caution. The McKinsey study also found that global indebtedness rose by another US$57 trillion since the end of 2007. Governments show the highest rates of debt growth. The financial sector and household debt grew the slowest. After the worst financial crisis since the Great Depression in the 1930’s one could have expected a reduction in debt, but debt continues to grow. It is like fighting fire with fire. The measures taken pose new risks to financial stability and global economic growth.

We still think that the coming crisis will be a debtees’ crisis and not a debtors’ crisis. In the end, tax payers and savers will have to pay for governments’ actions. To secure personal wealth it is necessary to be diversified. Investors should not rely on government funding and pension obligations. Government obligations will be the first ones to fall short if we run into another financial crisis. Wealth taxation and confiscation can become a major issue. In the European Union we have seen this already in the cases of Cyprus, Greece and Spain where assets where frozen, taken away or punitively taxed. In future this might happen more often and more drastically. Please contact us for further information about secure asset protection.